Once in a blue moon, one encounters an intense vintage car. Here's one! 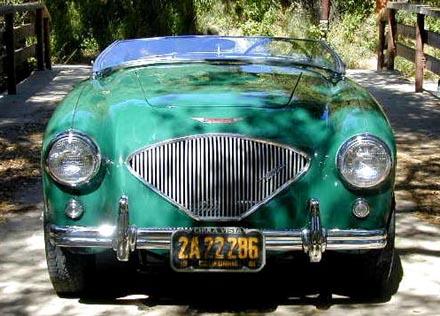 Born of a driven creator, a man as gifted as an engineer as he was as a race car driver, the Austin-Healey displays tremendous personality. The nucleus of a legendary lineage, the earliest "100" of 1952 embodies all that's right with purebred British Roadsters. Sharing this trait with Pete Morgan's Plus Four and Colin Chapman's Lotus Seven, there's nothing quite like a Big Healey in the whole wide World of street legal sporting machines. 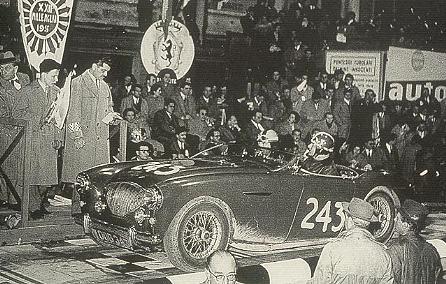 The Big Healey is one of the rare breed of 1950s sports cars that could be taken straight from the showroom floor to the racetrack--and win. As early as 1953, the Healey's competitive star shone brightly with a twelfth place overall in the gruelling Mille Miglia and a third place in the 12 Hours of Sebring, competing with the likes of Aston Martin and Jaguar. 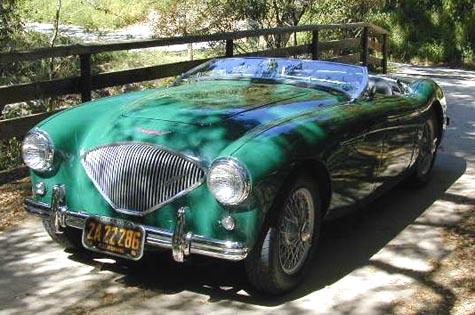 The 1955 BN1 model presented for auction here is a great example of the first Austin-Healeys built. For most cognoscenti the purest iteration, hence the only model worth primary consideration, it provides something none of its successors could deliver: a windshield that can be lowered to an almost horizontal position, for the ultimate in fresh-air entertainment!

In fact, the BN1's folding windshield is quite unique in post-war automotive history. Converted in less than a minute from a characteristic British Roadster to the closest thing this side of a motorcycle on four wheels, driving the Big Healey with the windshield folded back provides more exciting wind-in-the-face and bugs-in-the-teeth fun than any other automobile I can think of! 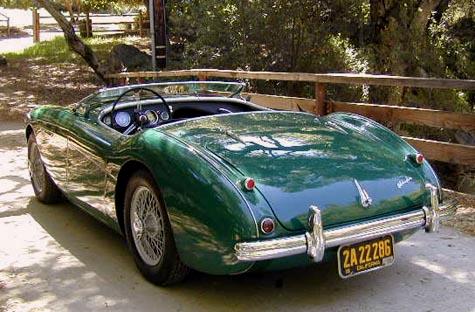 Donald Healey dispensed with all non-essentials on his masterpiece. For example, there are no outside door handles. You reach inside to open the doors and pull a simple strap to get out. Precisely this, however, is something you might want to avoid as long as you can, since the Healey is more fun than a barrel of monkeys!

Powered by a bulletproof 2660cc, long-stroke four-cylinder with 90bhp @ 4500rpm, BN1's engine is no ruffian. Rather, you will be surprised by its civilized demeanor and inspired by its eagerness to be unleashed on any winding road that lies ahead. The sprint from 0 to 60mph takes only 9.6 seconds, and a top speed of over 100mph certainly is nothing to be ashamed of either, considering the car being almost half a Century old! 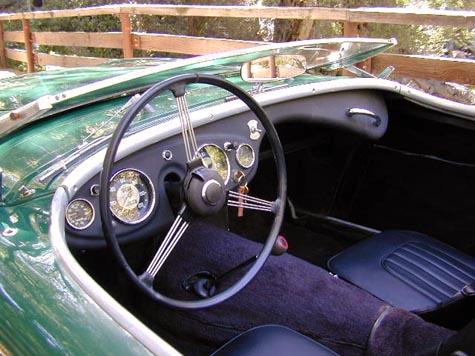 There's precious little soft trim in the cabin and the curve of the scuttle blends into the concave door tops, forming an aluminum-bound cocoon that literally buzzes in response to the engine's revs. A body style found on late '40s and early '50s Ferraris, the Italians call it barchetta, by definition a "little boat. " Interior accoutrements are minimalist, with excellent black bucket seats and some decades-old carpeting being the only comfort items. 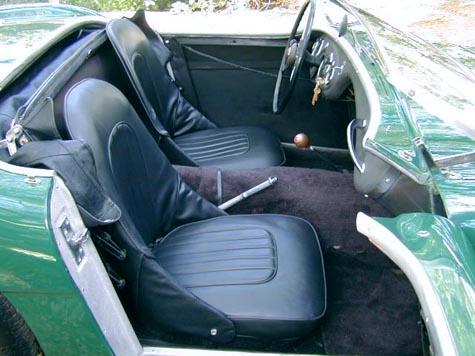 The painted dash with its curvaceous Art-Deco lines is carved from aluminum. Classic SMITHS instruments provide the special flair that makes owning an almost 50 year-old British or Italian Roadster such a visually rewarding experience. I should mention at this point that--in the best British tradition--the speedometer does not work at the time of this writing, neither does the horn. On the other hand, and far more importantly, the electric Laycock de Normanville overdrive engages and disengages with convincing smoothness, turning the transmission effectively into a 5-speed! Also fully functional: the steering wheel-mounted turn signal lever, the factory-installed heater and fan, and the emergency brake. Surprise, surprise! 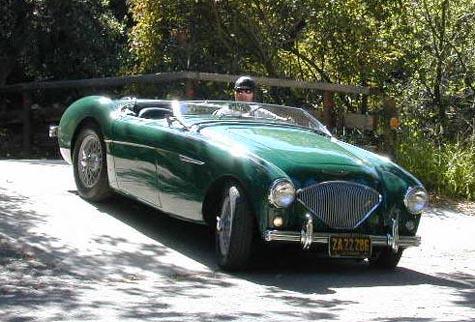 We decided to exercise the car a bit on a typically warm Southern California summer day. From the moment you press the small black Bakelite button to stir the reluctant-sounding starter motor, the car feels alive. The engine announces itself with a bark and reacts instantly--almost telepathically--to the throttle as the exhaust belches a throaty tune. Once you've familiarized yourself with the unique gearshift pattern of the all-synchromesh trans--first is down on the right (next to reverse), second is up, third down again--you put it in gear, let the clutch out, and the fun begins! 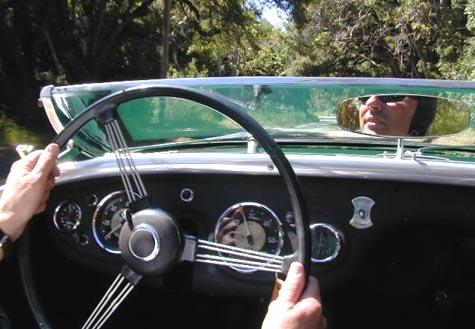 Sheer speed, although impressive, is not the most important factor here. Rather, there's a spirit telegraphed through every point of contact. The large Bakelite-rimmed Banjo wheel supports a vintage bent-arms-straight-legs driving position. Several sweeps are needed in tight corners, but a touch of throttle maintains balance. Oil pressure is excellent, even at idle (there are, of course, a few small leaks here and there), and this Big Healey does not overheat, even under the most severe driving conditions. I guarantee it! The brake system has been reconditioned recently, and the suspension is surprisingly smooth. 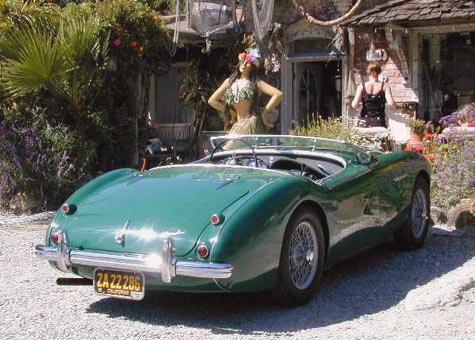 Built on a chassis comprising two longitudinal box-section members with cross-bracing, plus a welded floorpan, bulkhead, and scuttle, the Big Healey's structure was advanced for the time, nodding toward a monocoque design. 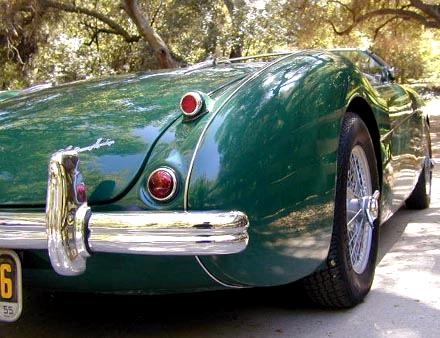 Its Gerry Coker-penned lines are timelessly beautiful and inspire many admiring comments wherever the muscular-looking 100/4 appears. This body is like Le Mans' Mulsanne: as straight and almost as long; the sparingly applied brightwork is in very appealing condition, too. 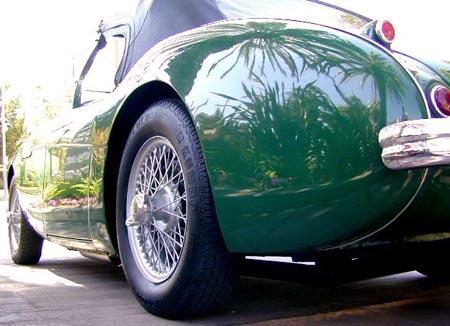 The most vulnerable and often haphazardly repaired section behind the front grille looks wonderful, with not the slightest indication that this car has ever been involved in any major fender bender. There is no visible rust, no thick layer of bondo as on many of its brethren. The floor pans are clean and so is the trunk.
It's the proverbial, but hard to find, dry Healey! 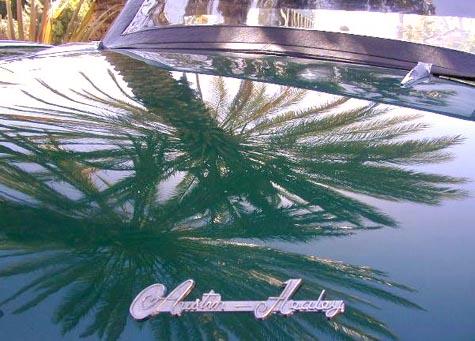 Originally Healey Blue, this BN1 has been repainted in a shade of the perennially popular British Racing Green, many years ago. The hand-rubbed paint is shiny as a mirror, with no dings, dents, or scratches that would deserve mentioning. 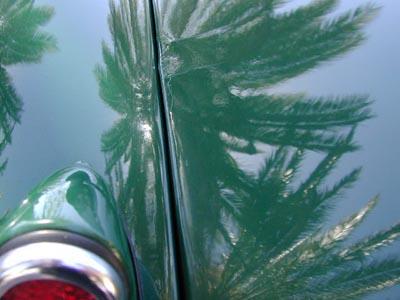 For a full size view, click on the image above.

There are a couple of isolated imperfections, like the one pictured above: in the left corner of the decklid, just above the mount for the hood prop, small paint cracks prevent me from using the word flawless when describing the Healey's exterior. 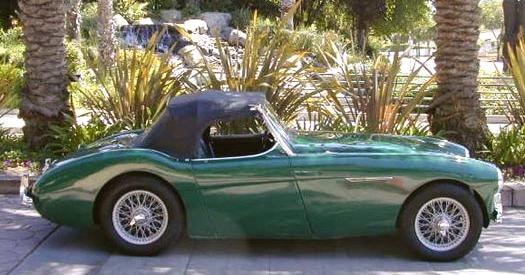 The Roadster top, which the British call hood, should only be raised in the most severe weather conditions, such as gale-force winds and cricket-ball sized hail. 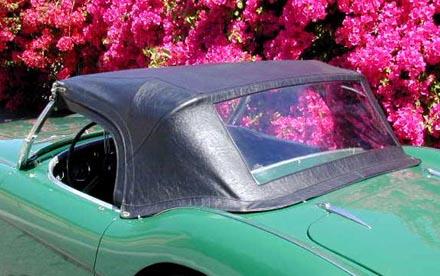 It's confidence inspiring to know, however, that Healey's top is in excellent condition throughout: Tough to close, it is tight as a drum with no fading, no cracks, and no rips anywhere. 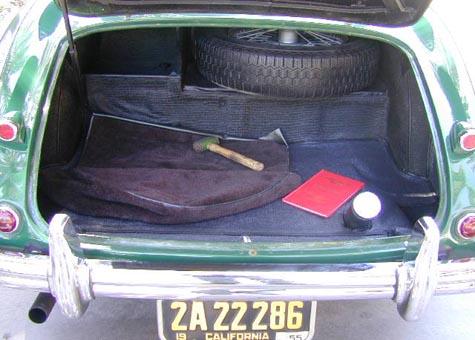 Spacious trunk is correctly lined with the original black, ribbed HARDURA material, contains spare tire and cover, knock-off hammer, and even the owner's manual. Also accompanying the car is the front valance that fits between bumper and body. 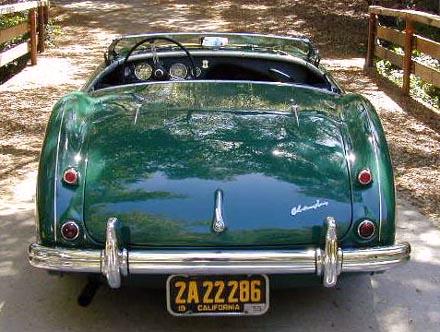 From any angle, the early Healey qualifies as a design masterpiece! 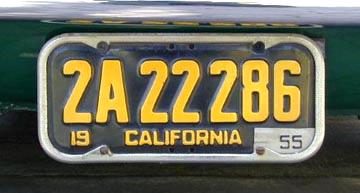 The Big Healey comes with a clear California Certificate of Title and is currently licensed for road use through 6/22/2002. Also included in the sale is a pair of valuable 1955 California license plates. Should the car remain in this state, these original plates could legally be assigned to the Healey, thanks to the DMV's Y.O.M. plate program. 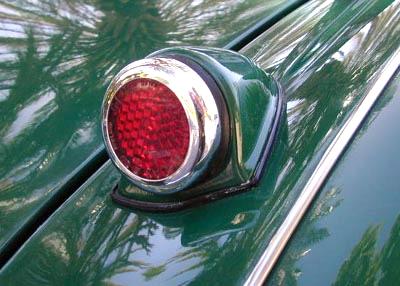 It's plain to see why the Austin-Healey 100/4 provides the most fun this side of a three-letter word. Not a show car by any means, it nonetheless is a beautifully preserved, highly esteemed relic of a distant past that embodies the pure essence of open-air motoring.